Eaton School has featured several bands since the program was started: a Senior Band which consists of students in Grades 9-12, a Junior Band, which includes Grades 7-8, and a beginner band of Grade 5-6.  For several years now, the Grade 4 class has been introduced to musical instruments such as recorders and ukuleles and grades K-3 are introduced to musical concepts such as rhythms.  Also, in past years, numerous students formed Jazz Bands which entertained at various school and community functions.  Each year, the community is entertained by the School Bands at the Winter Band Concert in December and again at the Strawberry Social in June.  Many students have participated in and received awards at the annual Kindersley and Leader Music Festivals.  Music has remained an important part in the lives of many graduates who got a real taste for it here at Eaton School.

Eaton School Bands have established a Local, Provincial, National and International reputation for excellence.  This reputation continues under the direction of Ms. Diedra Whitell.  The retirement of Mr. Mealey occurred in 2006, after a 30 year career at Eaton.  His shoes have since been filled by Mr. Scott Yemen, Ms. Amy Devries, Miss Karen Luptak, Mr. John Fisher, Mrs. Melissa Hynd, and by our current director, Ms. Diedra Whitell.

The Band Parents' Association is very active and it is through their fundraising efforts and hours of volunteerism that the Concert Band has been able to perform on tours to various destinations.  While the Eaton School Band has toured extensively in Western Canada, it has also traveled to Coeur d'Alene, Idaho; Rapid City, ND; Seattle, WA; Vancouver; Banff; Chicago; Ottawa; and Montreal.

The Concert Band's latest "big trip" was to Whistler to participate in the 2015 Con Brio Music Festical on April 21-27, 2015.  Students did very well at the performance.  They had a great time on the trip and many enjoyable, educational experiences.

Eaton School GSA is an all inclusive, after school program that promotes tolerance and acceptance throughout the school.  Our alliance provides a safe non-judgmental space where we can support one another, meet new people, hang out in a social setting and learn different points of view.  Our goal is to bring awareness to the issues faced by the LGBTQ2S+ community.  GSA'S can be a positive place for students who need support and encouragement! Our GSA helps staff and students learn about respect for one another in a positive and caring manner.

Football is synonymous with Eaton School.  In the 2007/2008 school year the school recognized the 50th year of Spartan Football.  Coach Doug Bailey began his football coaching career at Eaton in 1979 and was joined the next year in 1980 by his coaching partner, John Frison.  The two coached together for the next 27 years.  During this time, our 6- man teams won at both league and conference levels.  They competed in Provincials in 1998 & 1999 taking Gold, and in 1988 & 1994 they received Provincial Silver medals. The Spartan Spirit is always alive and well on the sidelines at Spartan football games.  "Sparky" has often been seen working the crowd into a frenzy.  It is this pride in the Spartan Football program which has made it stand for so long.  In 2004, the duo of Coach Bailey and Coach Frison were awarded the Saskatchewan Roughriders' "Amateur Football Coaches Award" which is presented annually to high school coaches "in appreciation for years of service for the development of Amateur Football in Saskatchewan".  Both Doug Bailey and John Frison retired from their coaching career after the 2006 season.

In 2007-2008, the torch was passed to former Spartan Clint Hayes who is now a teacher and coach at Eaton.  Due to a decline in the number of players, the Eatonia Spartans have joined forces with the Eston Mustangs and the Westcliffe Warriors on separate occations.  Nevertheless, loyal Spartan Fans will still be seen cheering the team.  Under the coaching of Clint Hayes and Brad Kulyk, the team once again won the provincial championship in 2019.  Go Spartans!!!

Volleyball at Eaton has been solid for many years.  In 2005, Eaton School hosted the Provincial Volleyball Championships.  The local Spartan team, coached by Matt Linner, played well throughout the season to earn them a spot in Provincial playoffs.  Unfortunately, that was not to be our year.

Then, in 2006, the Spartans, who were coached by Megan Boychuk and Assistant Coach Megan Specht, had a stellar season.  The team attended many tournaments, setting the stage for their drive to the Gold.  The school and the community were proud to again cheer our home town team on at the Provincial Championships being played in Kyle.  Going into Provincials, the team ranked very high.  They beat Gronlid in Semi-final play to face Rouleau in the finals.  The girls buckled down and played outstanding, defeating Rouleau 25-21 in two straight sets to capture the Provincial Gold Medal - a first in the history of volleyball at Eaton School.

The start of the 2007-2008 volleyball season saw a new coach step up to the net - Mr. Craig Vanthuyne.  Mr. Vanthuyne continued to coach the team with a goal of playing to the best of their ability in mind.   Coaching duties for Senior Girls volleyball were then passed on to Ms. Whitell, while Mr. Hoult and Mrs. Facca work with the junior girls, and Mrs. Bredy builds skills with the midgets,

The development of basketball skills at Eaton begins at an early age.  A Midget team consisting of boys and girls in Grades 4, 5 and 6 has been running for more than 15 years.  These players then move on to form the Junior Girls and Boys Basketball teams made of students in Grades 7, 8, and 9.  By the time the players reach the Senior team in Grade 10, they have a solid grounding in basketball skills.

Eaton School is known throughout the province for it's outstanding Basketball program.  Retired Coach John Frison developed a strong program at Eaton which led our senior Spartans to Divisionals, Regionals, Districts, and Provincials where they have seen success many different times.  In fact, the strength of the Spartans took them to Hoopla 7 years in a row.  They brought home the Silver medal in 2002, Bronze in 2003 and 2005, Silver in 2006, and finally, the Gold in 2007.  This is an amazing accomplishment of which players, parents, fans, Eaton School and the community of Eatonia are very proud.  Evidence of this pride is found on the sidelines at every game and many a vehicle full of fans have travelled across the province to cheer the Senior Spartans on to victory.

The popularity of the Junior Badminton program increased by leaps and bounds, with many grade 7-9 students signing up to play singles and doubles every year.  Coaches Michael Hoult and Shelley Follensbee has been impressed by the overwhelming interest in junior badminton.  The junior badminton program has since seen a number of students compete at the district level, where they have always been great representatives of Eaton School.

As a result of this junior interest, the Sr. Badminton team has seen an increase in interest as well.  Several seniors also competed in singles and pairs under the guidance of Mrs, Shelley Follensbee and Miss . 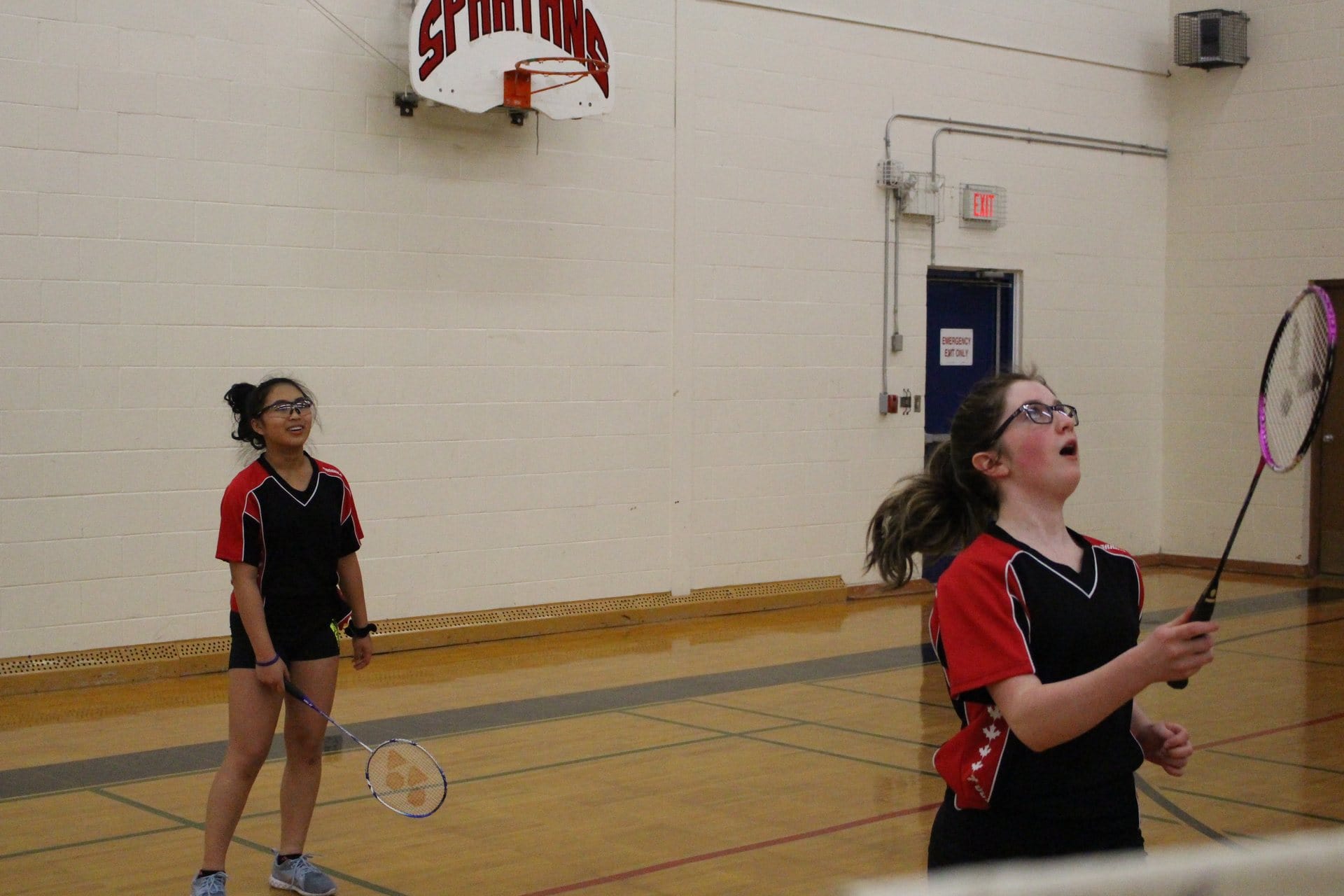 Eaton Track Athletes have received divisional, regional and provincial recognition over the years.  As far back as 1979 when Alice Humeny received Gold in Triple Jump and Adele Humeny got Silver in Hurdles and Bronze in Long Jump, Spartans have been competitive in all areas of Track and Field.  Some particular highlights include high jump (Brandi Cooper - 1993 Provincial Champion & Steven Toan - 2002 Bronze Medalist), shot put (Jayce Meyer - 2002 Bronze Medalist), and races (Kellie Boychuk - 2006 4x100 Relay Provincial Champion).  Many athletic individuals have left their mark in Track and Field at Eaton School, in the Division, at Districts, and Provincials. 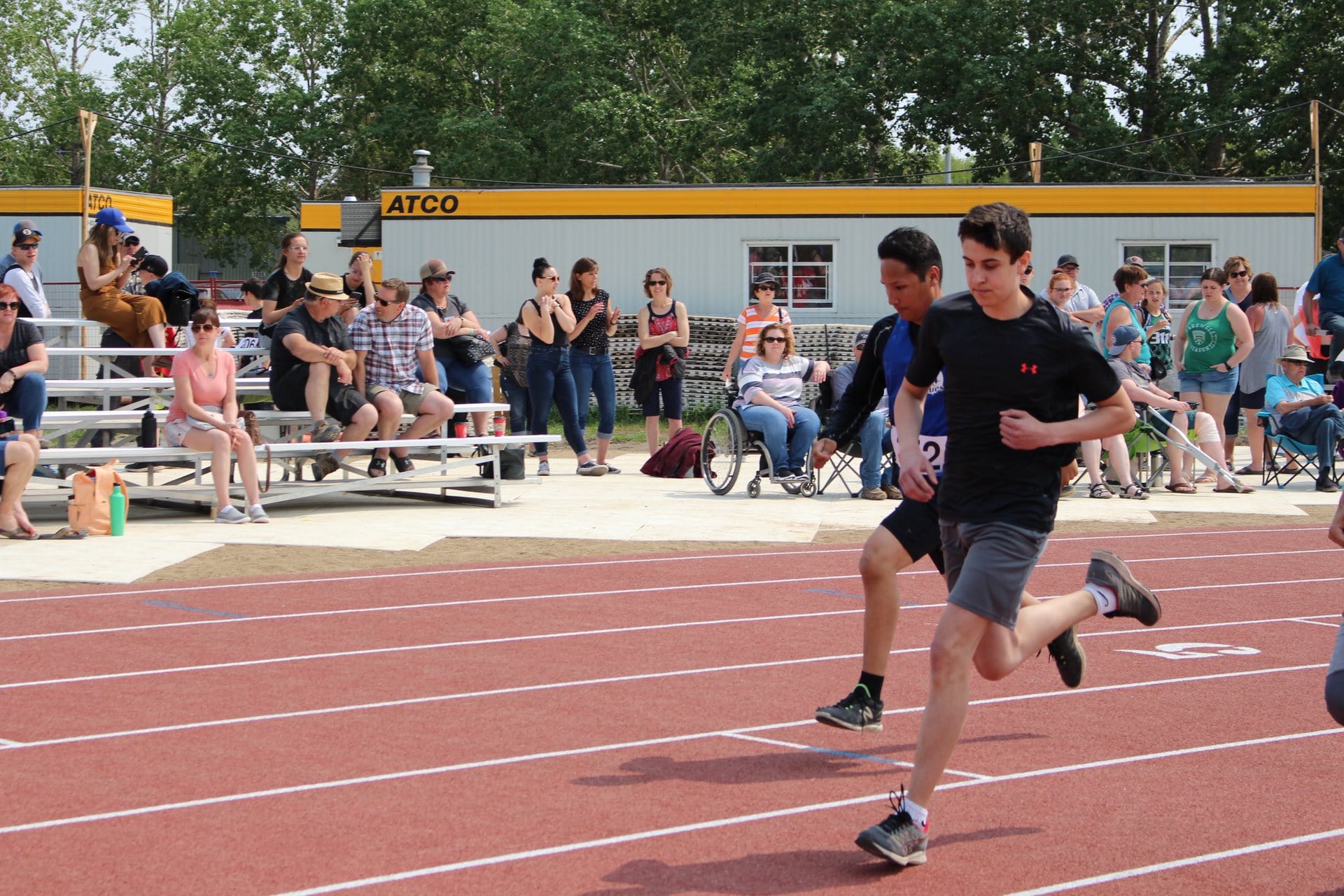 
The Cross Country Running program has been active since 2006 when Mrs. Ashley Kosior initiated the program upon her arrival at Eaton School.  The strength of this program has increased since then.  Training begins early September, and continues until the season wraps up in mid-October.  Our athletes have been recognized at several meets within the Division & are strong contenders with athletes such as Valerie Butt, Kasia Guidinger, Jonathan Guidinger, Kaylee Wickenheiser, and Kelsey Guidinger competing at the Provincial level.

Ms. Karen Luptak took over the program in 2010 and in 2011, Jonathan Guidinger competed at the provincial level, finishing 4th in his age category.  In 2012, Mrs. Shelley Follensbee became the coach of the program and in 2012, Kasia Guidinger showed her Spartan Pride at Provincials. In 2013, Jonathan Guidinger once again competed at the Provincial Level.  In 2016 coaching of the Cross Country team was taken over by Ms. Trish Lee and she was joined in 2018 by Mrs. Joanie McLay. 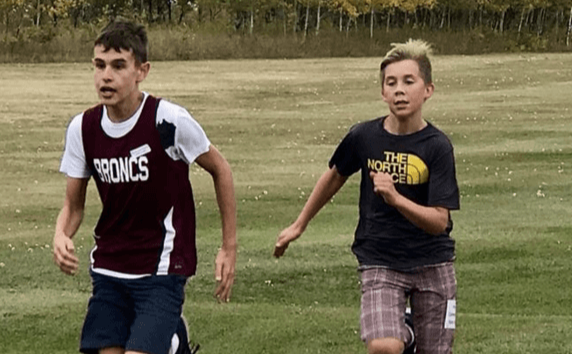 The Drama Club was a part of the extra curricular activities at Eaton School for more than 25 years.  During that time, they presented over 10 Dinner and Dessert Theatres, numerous Christmas plays, school musicals involving students in K-12, and community shows for Can-AM and Saskatchewan's birthday celebration.  The Eaton School Drama Club began entering regional competitions in 1984.  Since 1984,  the school has produced 29 plays for the Saskatchewan Drama Association Festivals.  In 2005 they performed an original collective called The End Of The Line?, a play that was written by the students in honor of the pioneers of Eatonia.  Eaton School Drama Club has received numerous awards at Regional Festival each year.  Many students have been recognized for individual contributions with acting and technical awards and certificates of merit.

After the retirement of Mrs. Lenore Bailey in 2007, the Eaton School Drama Club fell under the direction of Mrs. Ashley Kosior, who moved from Eaton in 2009.  Sitting in the directors' chairs starting in the 2009-2010 school year were Mrs. Marla Frison and Mrs. Patti Filykperforming "15 Reasons NOT To Be in a Play" in 2010 and "Epic Fail" in 2011.

Recently, Drama has been restarted at Eaton School by Mr. Adam Naismith, Mrs. Cindy Facca, and Mrs. Kailin Mayes.  The club's 2019 performance of "10 Ways to Survive a Zombie Apocalypse" was well received. 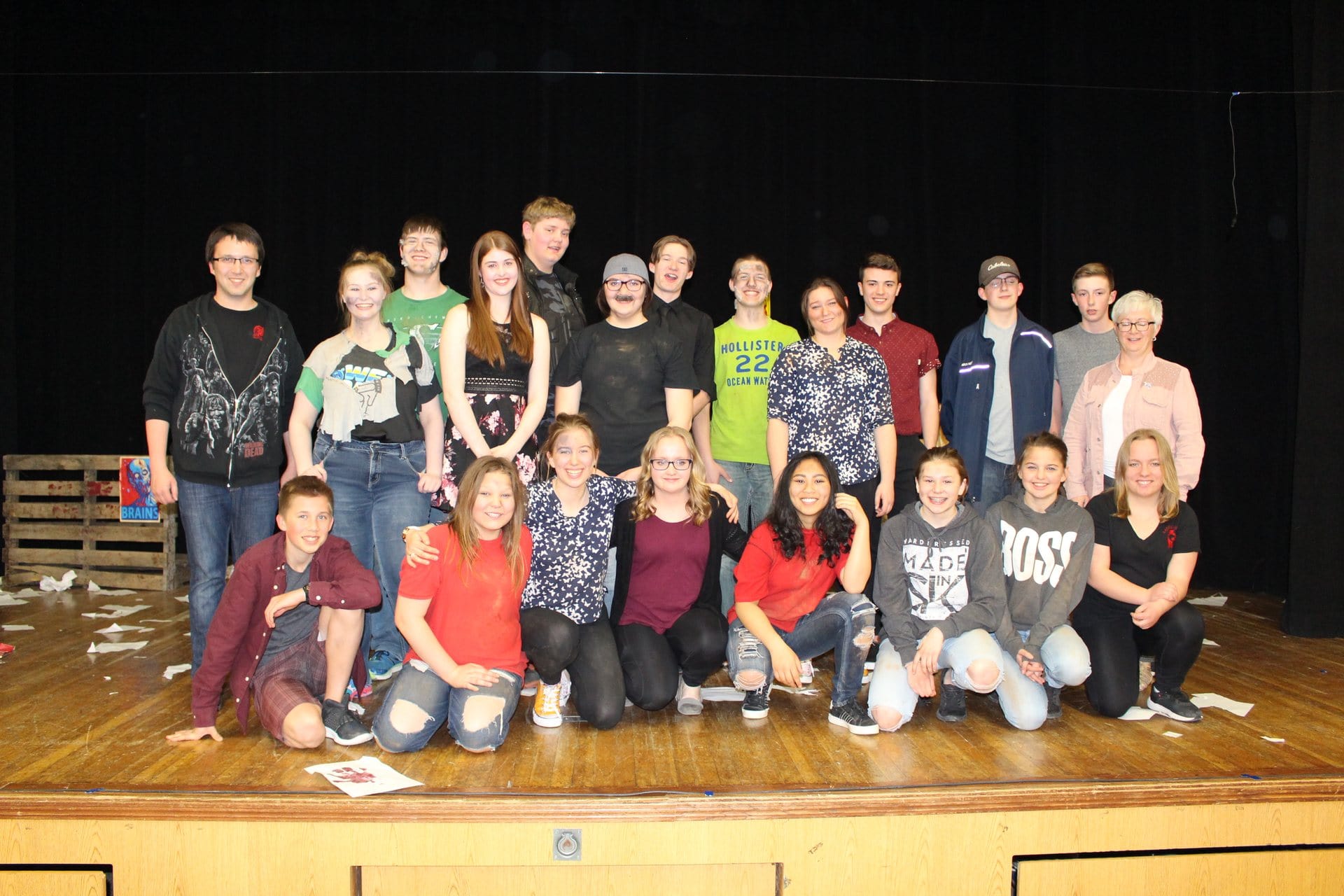 The Spartan Wilderness Adventure Team was initiated in the fall of 2009 by Mr. Craig Vanthuyne with support from Ms. Karen Luptak, Mr. Cam Aitken, Mr. Clint Hayes, Ms. Trish Lee, and community member Brett Becker.  SWAT is an outdoor, extra-curricular program that focuses on eco-friendly camping/canoeing practices and provides students an opportunity to experience Saskatchewan's natural beauty first hand.  In 2011, SWAT purchased the final equipment needed to make this program a permanent fixture in the extra-curricular programming at Eaton School.  Without the generous contributions from the community and surrounding area, this would not have been possible.
SWAT is divided into three basic categories:  Level 1 (Beginner), Level 2 (Intermediate) and Level 3 (Advanced) and grades 10, 11 and 12 students can participate.

The first ever SWAT Trip took place in June of 2010.  In June of 2011, two trips took place with both Level I and Level II SWAT members taking part.  Level III was added in 2012 which completed the program.  Each level builds on prior skills and the trips become more challenging, both physically and mentally, as students progress through the levels.